I of the three ships participating on Columbus’ offset transatlantic voyage

(Spanish for
The Painted One,
The Look, or
The Spotted One) was the fastest of the three Castilian ships used past Christopher Columbus in his start transatlantic voyage in 1492. The New World was first sighted by Rodrigo de Triana aboard
La Pinta
on 12 Oct 1492. The owner of
La Pinta
was Cristóbal Quintero. The Quintero brothers were transport owners from Palos. The owner of the ship allowed Martín Alonso Pinzón to have over the send so he could go on an eye on the ship.

La Pinta
was a caravel-type vessel. By tradition Spanish ships were named after saints and unremarkably given nicknames. Thus,
La Pinta, like
La Niña, was non the ship’due south actual proper noun;
La Niña’s
actual name was the
Santa Clara. The
Santa María’s original nickname was
La Gallega. The actual original name of
La Pinta
is unknown. The origin of the send is disputed but is believed to accept been built in Kingdom of spain in the yr 1441. She was later rebuilt for employ past Christopher Columbus.

The other ships of the Columbus trek were
La Niña
(real name
Santa Clara) and
Santa María. There are no known contemporary likenesses of Columbus’south ships.

Santa María
(likewise known as the
Gallega) was the largest, of a type known as a carrack (carraca
in Spanish), or by the Portuguese term
nau.
La Niña
and
La Pinta
were smaller. They were called caravels, a proper noun then given to the smallest three-masted vessels. Columbus in one case used the discussion for a vessel of forty tons, but it generally practical in Portuguese or Spanish employ to a vessel ranging from 120 to 140 Castilian “toneles”. This word represents a capacity nigh one-10th larger than that expressed by the modern English “ton”. 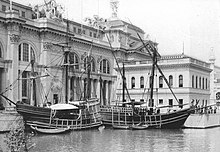 La Niña
and
La Pinta
replicas at the 1893 Columbian Exposition

La Niña,
La Pinta, and
Santa María
were non the largest ships in Europe at the time. They were small trade ships surpassed in size by ships like
Great Michael, built in Scotland in 1511 with a length of 73.2 m (240 ft), and a crew of 300 sailors, 120 gunners, and upwards to 1,000 soldiers.
Peter von Danzig
of the Hanseatic League was built in 1462 and was 51 chiliad (167 ft) long. Another large ship, the English carrack
Grace Dieu, was built during the period 1420–1439, was 66.4 m (218 ft) long, and displaced between 1,400 tons and 2,750 tons. Ships built in Europe in the 15th century were designed to sail the Mediterranean Sea and the Atlantic Sea coastlines. Columbus’ smaller-sized ships were considered riskier on the open up body of water than larger ships. This made it difficult to recruit crew members, and a small number were jailed prisoners given a calorie-free sentence if they would canvass with Columbus.[iii]

Most of the commerce of the time was the coastal commerce of the Mediterranean, so it was ameliorate if ships did not depict much water. Every bit it sailed, the fleet of Columbus consisted of
Gallega
(the
Galician), which he changed to
Santa María,
La Pinta
and
La Niña. Of these the starting time two were most 130 tons.
La Niña
was much smaller, not more than 50 tons. One writer says that they were all without full decks, that is, that such decks as they had did not extend from stem to stern. Other authorities, even so, speak equally if
La Niña
just was an open up vessel, and the two larger were decked. Columbus himself took command of
Santa María, Martin Alonso Pinzon of
La Pinta, and his brothers, Francis Martin and Vicente Yanez, of
La Niña. The whole company in all iii ships probable numbered 90 men (Santa Maria 40, La Nina 24, La Pinta 26) although some historians cite 120 men.[4] 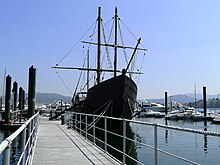 A replica of
La Pinta
was built by the Spanish government for the Columbian Naval Review of 1893. Along with replicas of
Santa María
and
La Niña, it participated in the review.[5]

Replicas are on display in two locations in Spain:

In 2008, a replica of
La Pinta, although fifteen feet (4.v thou) longer and 8 anxiety (2.4 1000) wider than the original, was launched past the Christopher Columbus Foundation.[7]
This ship weighs[
draws?
]
101 tons and often sails alongside an accurate replica of
La Niña, which was launched in 1991.

Replica of
La Pinta
commissioned by the Columbus Foundation